Rohann Murdoch from Shark in the Park, Calvin McDade from Metropolis, Waitress from Crime Story, and Girl from Turbo Charged Prelude to 2 Fast 2 Furious

This is a cop show. It’s 2048. All cops have an android partner. There are robot hos. Technology is super advanced, but everyone drives a Ford.

John Kennex loses his partner in an explosion. An android cop wasn’t able to save them both (because he disobeyed one of the 3 Laws of Robotics, not mentioned at all). John can’t remember some stuff. I wonder if he remembers killing Lola (who was technically but not physically running) on a bridge in India? Jason Bourne does. The explosion left John with a synthetic leg.

As cops do, John gets a new partner. An android named Dorian. Dorian is fine. 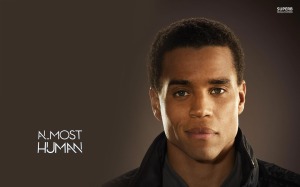 Dorian has feelings, but not in a Commander Data emotion chip kind of way. Dorian is also a dick.

The chemistry between the two is engaging. They have, or will have, good banter as the show finds its footing. As long as Karl Urban’s performance as Bones doesn’t bleed into his portrayal of Kennex, he’ll be good to go. Not that he has a history of that. There are mysterious flashbacks that involve something called Myklon Red. Is that anything like Ketrocel White? I am totally down if Weyoun shows up in this piece. Or even Third T’Lak T’Lan, after telling Major Kira’s bitch ass that the colonists on New Bajor “fought well for a spiritual people.” Sorry, I’m off track. The premise of the show has a familiarity. It really gives me Robocop meets Alien Nation. If you don’t know what Alien Nation is, that is too bad. For you.

Work it, you boring bitch. I didn’t watch Friday Night Lights, and the only thing I knew her from was The Roommate. The Roommate is actually not that bad. You haven’t lived until you see Blair Waldorf doing “gimme hands” at the gun during the final showdown between the two. It is fantastic. When Best Buy will lower the price on the Blu-ray to less than $9.99, that film is mine. But I digress. Minka is the kinda like the computer nerd in the office. Think Topher from Dollhouse, only boring as fuck. Turns out her mom was an exotic dancer and her dad is former Aerosmith guitarist Rick Dufay. Yeah, I wasn’t excited by that either. She doesn’t really have much to do so far on the show, but only 2 episodes have aired so we’ll see.

Lily Taylor plays Captain Sandra Maldonado. Also, she doesn’t have much to do yet either. But her plastic surgeon did something. He gave her “The Angry Executive.” Watch an episode, you’ll see. Plastic surgery doesn’t seem like something Lisa Kimmel would do, so it kinda makes me sad.

The show is a little heavy on showcasing the technology. Which I suppose is fine for a sci-fi cop show establishing its mythology. But, Dorian shows a group of kids visiting the station how he has blue lights that glow on the side of his face. Not to be outdone, John shows the kids how he can drive a knife into his (synthetic) leg. They scream and leave. The kids really should have left when they realized that Dorian’s blue lights are just like the blue circle in Windows 7 on a PC. He showed them that he can think, and had lights to prove it. Not so fucking special.