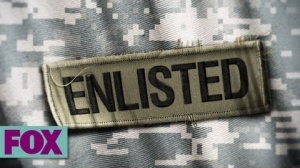 THE CAST IN SIX DEGREES OF DAMON WAYANS

Geoff Stults was on October Road with Bill Cobbs who was on My Wife and Kids with Damon Wayans.

Chris Lowell was on Private Practice with Gina Rivera who was on In Living Color with Damon Wayans.

Parker Young was on Suburgatory with Tom Yi who was on Damon with Damon Wayans.

Keith David was on Rhythm & Jam with Carrie Ann Inaba who was on In Living Color with Damon Wayans.

Three brothers are stationed at the same Army base in Florida. Hilarity ensues.

At first, nothing. But then something happened between the first and second episode, and the quality jumped 100%. If you only watched the first episode, you probably bolted. The first episode is terrible. I stuck around because Entertainment Weekly said it was funny, then it was #7 on The Must List. It is quite a charming little show. It is unfortunate that FOX put it on Friday nights at 9:30. Last night, Enlisted had 3.2 million viewers (making it the #11 show of the night… out of 15) and 1.0 18-49 rating (meaning 1% of viewers ages 18-49 watched), which was an increase of 66.67% from the week before. That’s not good.

What is really working so far is the chemistry between the brothers. The brothers are all hot, by the way. Hot. The oldest brother (Pete, who kinda looks like Nathan Petrelli from Heroes) was stationed in Afghanistan, and he fucked up and got sent to Florida to join his brothers in a rear detachment unit (they wash tanks and shit). The two younger brothers are what the fuck is up. The youngest (Randy, giving Peter Facinelli realness) is Ryan Shay from Suburgatory, and apparently that is the only character he can play: hot & dumb. I’ll watch that all day. He thinks the Pixar lamp doesn’t have a family, and he’s quite passionate in that conviction. The middle brother (Derrick, serving me boner headaches) is that drunk asshole guy that Skeeter dated in The Help. To me, he is next-level sexy and he could put it anywhere. They are part of a squadron of typical misfits: the nerd, the fat guy, a sassy black girl, a crazy Asian girl, etc. There is another unit on the base led by Sgt. Perez, which brings me to…

I don’t know this bitch from a hole in the ground. When I looked her up on IMDb, it turns out she has guested in several things I’ve seen (Friends With Benefits, Happy Endings, Don’t Trust the B– in Apartment 23) but I don’t remember her basic ass. She’s the love interest for Pete, and I couldn’t care less about her. In the first episode, she worked my last nerve by doing her best impression of Big Red from Bring It On. In subsequent episodes, my patience is tested the moment she appears on-screen. Don’t invest, she has nothing to offer.